Global design manufacturer Herman Miller, Inc. (NASDAQ:MLHR) is joining forces with Sustainable Brands®, BASF, General Motors (GM), and Green Standards to support The Michigan Urban Farming Initiative (MUFI), a Detroit-based nonprofit whose mission is to use urban agriculture as a platform to promote education, sustainability, and community and to uplift and empower urban neighborhoods. MUFI is debuting America’s first sustainable urban agrihood, an alternative neighborhood growth model in Detroit’s lower North End that positions agriculture as the centerpiece of a mixed-use urban development.

To serve as the urban agrihood’s central activity hub, the partners will restore a three-story long-vacant building across from MUFI’s urban garden into a Community Resource Center (CRC) and transform adjacent vacant land into a healthy food café. The 3,200 square-foot, box-shaped CRC will offer educational programs, event and meeting space, and serve as the organization’s new operational headquarters. It will also house two commercial kitchens on the first floor that will service the café and allow for future production and packaging of valued goods. The project is scheduled to be unveiled as part of Sustainable Brands ‘17 Detroit conference, held at the Cobo Center May 22-25.

MUFI is one of 100 nonprofit organizations in Michigan to receive furniture donations from GM through the automaker’s recently announced partnership with the Herman Miller rePurpose program. Through the program, GM is repurposing tens of thousands of surplus office assets resulting from the renovations occurring at its Warren Technical Center, Milford Proving Ground, and global headquarters in Detroit with an estimated community benefit of $1 million in in-kind donations. 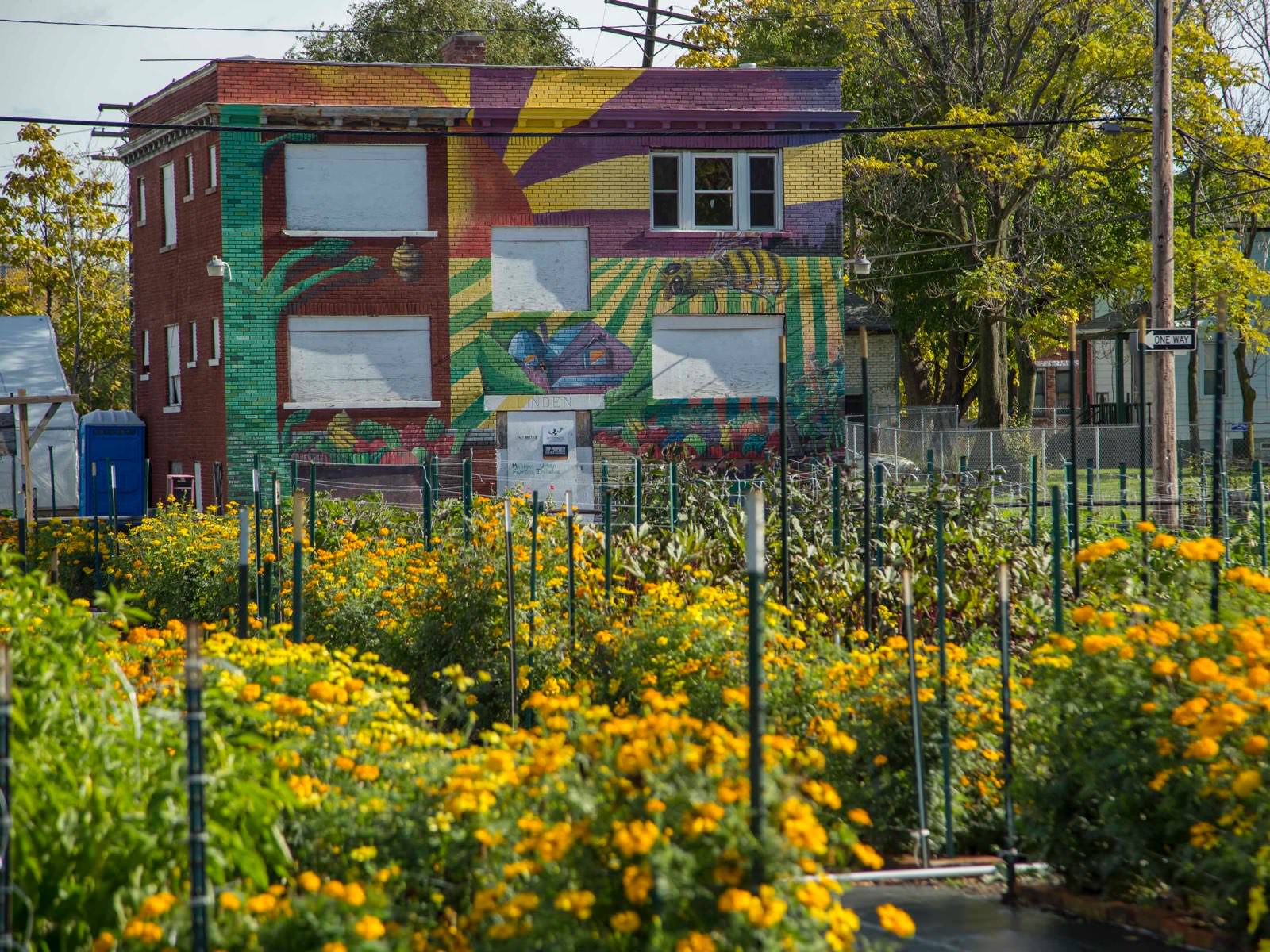 Herman Miller is also lending its design expertise to create purposeful, multi-use spaces that will enhance collaboration and foster a sense of community. Architectural design and construction is managed by Integrity Building Group of Detroit.

Totaling about three acres and nestled in a neighborhood among vacant land, occupied and abandoned homes, MUFI’s urban agrihood features a two-acre urban garden with more than 300 vegetable varieties, a 200-tree fruit orchard, a children’s sensory garden, and more. Annually, the urban garden provides fresh, free produce to about 2,000 households within two square miles of the farm. Since its first growing season in 2012, MUFI has distributed more than 50,000 pounds of free produce.

“Over the last four years, we’ve grown from an urban garden that provides fresh produce for our residents to a diverse, agricultural campus that has helped sustain the neighborhood, attracted new residents and area investment,” said Tyson Gersh, MUFI president and co-founder. “This is part of a larger trend occurring across the country in which people are redefining what life in the urban environment looks like. We provide a unique offering and attraction to people who want to live in interesting spaces with a mix of residential, commercial, transit, and agriculture."

Since 2012, MUFI has spurred area investments and volunteer service hours equating to about $4 million. More than 8,000 volunteers have collectively contributed more than 80,000 volunteer hours over the last four years. The organization has several other projects underway including the restoration of a long-vacant home into student intern housing, a two-bedroom shipping container home, and the recent deconstruction of a fire damaged home bordering the farm. The home’s basement was retained and is being converted into a water harvesting cistern that will automatically irrigate the garden while preventing runoff into the Detroit’s sewer system.

The Herman Miller rePurpose Program is a unique and industry-leading solution for managing surplus corporate assets through a combination of resale, recycling, and donation. Managed by Toronto-based environmental firm Green Standards, rePurpose diverts 99 percent of no-longer-needed office furniture and supplies from landfill and transforms them into valuable in-kind donations to nonprofit community organizations. Since Herman Miller launched the program in 2009, rePurpose has diverted more than 27,000 tons of product from landfill and generated $18 million in charitable in-kind donations.

General Motors is the first metro Detroit-based automaker to partner with rePurpose on a large-scale, multi-site campus decommission project. To date, GM has diverted 550 tons of office material from the landfill through the rePurpose program, equal to growing nearly 46,000 tree seedlings for 10 years, or offsetting electricity use from nearly 250 homes for one year. Over its lifetime, the program is estimated to divert more than 2,000 tons of material. The multiyear project has the potential to expand across the country.

About Herman Miller, Inc.
Herman Miller is a globally recognized provider of furnishings and related technologies and services. Headquartered in West Michigan, the global company has relied on innovative design for over 100 years to solve problems for people wherever they work, live, learn, and heal. Herman Miller’s designs are part of museum collections worldwide, and the company is a past recipient of the Smithsonian Institution's Cooper Hewitt National Design Award. Known and respected for its leadership in corporate social responsibility, Herman Miller has been included in the Dow Jones Sustainability World Index for the past 12 years, and has earned the Human Rights Campaign Foundation’s top rating in its Corporate Equality Index for the past nine years. In fiscal 2016, the company generated $2.26 billion in revenue and employed nearly 8,000 people worldwide. Herman Miller trades on the NASDAQ Global Select Market under the symbol MLHR.