Open to a new world of learning 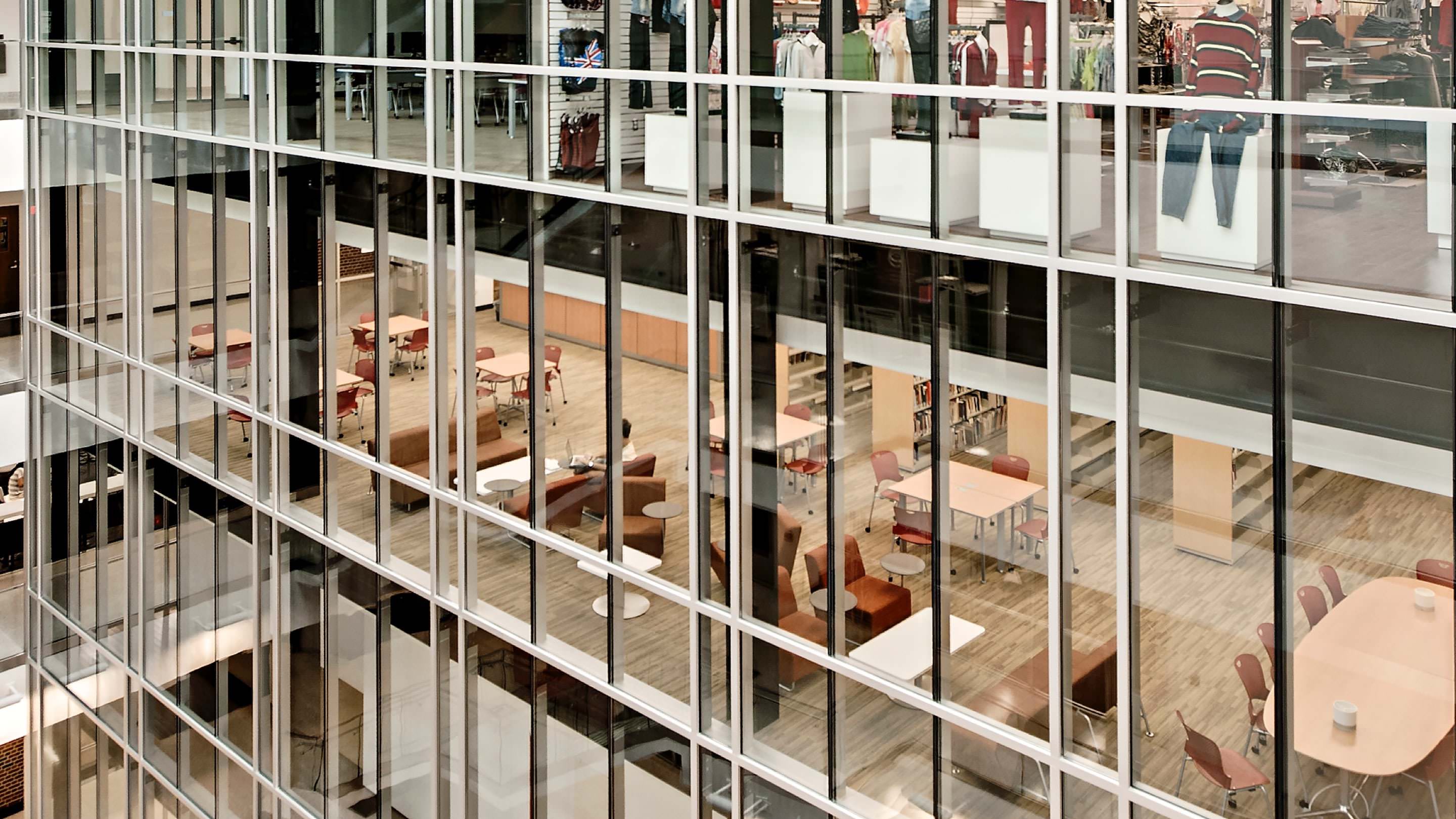 The historic renovation and expansion of Florida State University’s William Johnston Building presented an ideal opportunity for Gould Evans, an architecture firm specializing in higher education projects that promote student success. The overall goal of the 145,000-square-foot space was to preserve the integrity of the Jacobean architecture of the two original buildings (built in the early 1900s) and at the same time, create a dynamic new space that would support 21st century teaching and learning.

The three colleges and seven departments that were going to be housed in the new space demanded a wide array of classrooms, lecture halls, learning studios, tutoring spaces, exhibit space, laboratories, faculty offices, meeting rooms, and public/common areas. It also had to support multidisciplinary collaboration and interaction among the various faculty members and students. “So the space had to be flexible enough to meet an enormous amount of needs,” says Tom Wilkinson, Herman Miller representative.

Campus leaders also wanted the new space to be open and transparent, “so that people could see the whole range of student involvement and all the amazing things going on at Florida State,” says Karen Laughlin, Dean of Undergraduate Studies.

Oh, and the building needed to be LEED Gold certified too.

“Way-finding was another important aspect,” notes architect Beverly Frank, as was creating visible but separate identities for the many departments that would be calling the new building home.

And that’s what led the architectural team to the idea of glass, lots of glass; a 5-floor curtain wall of glass that would connect the two older buildings, bring in lots of natural light, provide the highly visible environment they wanted, make it easy for people to find their way around, and give them nearly 70,000 square feet of space that could be designed with virtually unlimited flexibility.

The next challenge? Furniture. Architects aren’t always involved in the selection of furnishings, “But we realized it would play a key role in how this building would function, particularly in the classrooms and learning studios, so we asked the college if we could be part of that process and they agreed,” says architect and Gould Evans Principal Steve Carpenter, who worked with Frank on the project.

The School of Art and Design’s Interior Design department was one of those that would be in the Johnston Building, and who better to help select furniture for the project than its department chair? Eric Wiedegreen, now retired from the university and working as an architect and interior designer, was happy to oblige. He said later that the experience was “the best I’ve had in my entire career.”

The architects invited two furniture vendors to present their ideas, “and it was clear from the start that Herman Miller was very much in tune with what we were trying to do,” says Carpenter.

In fact, architect Beverly Frank says the relationship the design team developed with the Herman Miller dealership Office Environments proved invaluable. “Jack Mozley (Account Manager) was on site every day, and he wasn’t just engaged with us, but with everybody, whether it was a contractor or a user, whenever anybody needed him to do something he was there,” says Frank. “Office Environments really became the model of the type of partners we want to deal with because that’s the kind of service we offer our clients. Ultimately, it all reflects on us and they really helped to make us look good.”

Office Environments designer Kim Gray made the selection of individual products easy, too. “I’d tell Kim what we needed in a particular space and she’d come back to me with three or four solutions and that’s how we worked, all the way through the project,” recounts Frank.

“We tried to come up with the best solutions that would fit their budget and give them the mobility and flexibility they needed,” says Mozley.

"Herman Miller really helped us solve some issues not only in terms of economy, but in student engagement and success,” continues Frank. “The faculty at FSU is very progressive in the way they think, and so is Herman Miller. It was a matter of getting the most bang for the buck and they were very smart in where they put the emphasis and how they helped us strategize.”

Another advantage, says Frank, is Herman Miller’s broad product lines. “Selecting furniture for this huge building with all its different users could have been incredibly time-consuming—catastrophic even—but it was fantastic because we could get so much variation in a minimum of product lines. For example, the Caper Chair, which everybody really loves, can be either freestanding, a tablet arm, or a bar stool, so we used it everywhere.”

Students and faculty love all the movable tables and chairs, both in classrooms and around the open spaces. “Our students are a new generation; they don’t like to sit in one spot,” notes FSU Vice President Sally McRorie, former Dean of the College of Visual Arts, Theatre & Dance. “The fact that they can move the chairs around to spread out or gather in small groups is really important. Plus, they have their backpacks and laptops with them all the time, and can just stash them under the tables.”

Professors appreciate the mobility, too. “I can break my class into small groups in a split second and there’s no horrible scraping of chairs across the floor, or worse yet, no choice because the seating is bolted onto the floor,” says Lisa Waxman, Department Chair of Interior Design, who also loves the new gallery space which is filled with natural light.

Appropriately enough, the first exhibit shown in the gallery was called “CLASSIC Herman Miller” and featured the personal furniture from the estate of a long-time Herman Miller employee, including iconic pieces by Charles and Ray Eames, George Nelson, Isamu Noguchi, and Alexander Girard. The exhibit was so popular it stayed up for nearly a year.

“Students today see an Eames Lounge Chair and they almost take it for granted, but seeing one from the 1950s, which was used every day by someone in their own home, shows them that good design lasts a long time,” says Wiedegreen. “It also helps make the connection that the furniture we’re using in our building will do the same thing.”

The office furniture choices proved to be winners, too. As Gray, an FSU grad herself, explains, “Canvas Office Landscape is easily reconfigurable, comfortable, user-friendly, and very functional, so it was a good choice for those areas.” Small side tables, included in some faculty offices, can be tucked away and then pulled up when meeting with students.

“The offices are also very clean and open, which mirrored what was going on in the rest of the building,” says Wiedegreen, adding that they employed a non-hierarchical philosophy, “where everybody from the ‘boss’ on down got the same thing, which was a good message for our staff.”

“It not only looks good, it helps people do their jobs well, and I think they feel they’re being rewarded for doing a good job,” adds McRorie, who believes that FSU’s Interior Design department now offers the very best of facilities, “and the Herman Miller furnishings are a part of that success. Once people get past the ‘awe’ of the building, they see how well the furniture functions, particularly the flexibility aspect of it.”

“People are finding all kinds of creative ways to use every inch of space,” agrees Laughlin. “The idea of giving students a true learning environment is a really wonderful concept. They can embrace the space and make it their own, and that’s what they’re doing.“

All agree that the success of the William Johnston Building was the spirit of collaboration that went into it. “The architects really listened to what we had to say and the dealership was very responsive to our needs,” says Wiedegreen.

The glass atrium has become the focal point of the entire project, “like a lightning bolt,” says Mozley, of the dramatic impact it’s had on the campus. It’s a welcoming beacon to all, and a “beautiful marriage of old and new,” adds Laughlin, who admits to being surprised herself at the “spectacular” end result.

The building received the AIA Florida Honor Award of Excellence for Historic Restoration, but most important, says McRorie, is that “It’s an engaging environment that is as conducive to learning as it is beautiful.”