The Story Behind Isamu Noguchi’s Playscapes in Atlanta

The revival, and influence, of an icon of modern playground design

Artwork by: The Noguchi Foundation and Garden Museum

Playscapes, designer and sculptor Isamu Noguchi’s only playground in the United States, is a set of colorful, architectural, and flexible metal and concrete pieces set in a clearing in Atlanta’s wooded Piedmont Park. Perhaps more importantly, it’s the expression of decades of thinking and tinkering about the best way to get children moving, thinking, and exploring the natural world.

The 1976 playground was originally sponsored by Atlanta’s High Museum of Art and the National Endowment for the Arts, and it demonstrated a commitment to bringing art to the people and to public spaces that resonates with the way we are making and remaking cities today. In projects from New York’s High Line, which includes a children’s area, to the ubiquitous “splash pads” incorporated into center-city parks, we see Noguchi’s ideas at work. As art critic Thomas Hess wrote of one of Noguchi’s unbuilt projects, this “playground, instead of telling the child what to do (swing here, climb there), becomes a place for endless exploration.”

“I think of playgrounds as a primer of shapes and functions; simple, mysterious, and evocative; thus educational.”

Noguchi designed his first landscape for children in 1933. Play Mountain, which was never realized, includes steps, a curving ramp, a pool, and a rock, all elements that would recur as he designed and redesigned playgrounds and courtyards over the next 50 years. In 1940, he created the prototypes for play equipment—spidery and delicate rather than excavated and solid—for the Ala Moana Park in Honolulu, Hawaii, a project which also failed to go forward. In 1941, responding to critiques that his stepped swings and seesaws were too dangerous, he tried another tactic, modeling the Contoured Playground entirely of earth mounded, channeled, and hollowed. Through the 1950s and 1960s he tried repeatedly to build a playground in New York, first for a site near the United Nations and then, from 1960 to 1966, in collaboration with architect Louis Kahn, for a hilly site in Riverside Park.

“Noguchi tried in every single decade to get a playground built in New York,” says Dakin Hart, senior curator at the Noguchi Museum. “In each case, the concept became more sophisticated, there was more public support and more private support. He put a whole program in place to give him the best possible chance and each time he was ultimately foiled by the complexities of the political situation.” His first completed playground was the temporary Kodomo No Kuni, outside Toyko, built in 1965 for the Japanese Children’s Year. 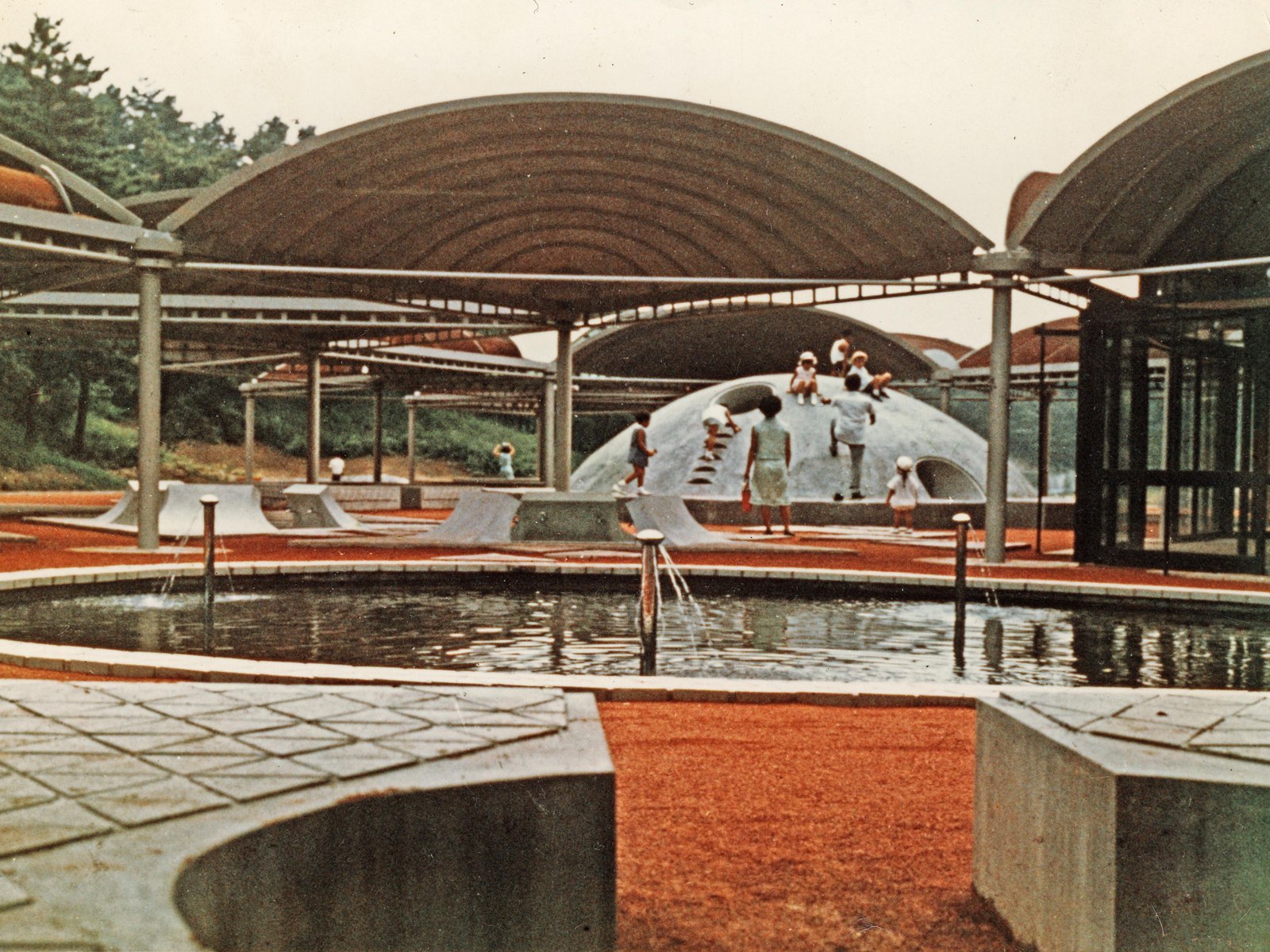 Though his career as a playground designer was a chronicle of frustration, Noguchi’s ideas for playscapes resonated. He incorporated many of the same spatial motifs and ancient landscape forms into gardens for corporations like Chase Manhattan and IBM, as well as public, all-ages parks like Hart Plaza in Detroit. Meanwhile, New York playground design pioneers M. Paul Friedberg and Richard Dattner, clearly influenced by Noguchi’s modeled forms and embrace of movable, natural elements like sand and water, were able to find a sympathetic parks commissioner in Thomas Hoving. Their mountains and fountains still play across Manhattan.

“[Noguchi] had a really good concept that playgrounds should not be designed like military exercise equipment for a cheaply executed boot camp... He thought kids should experience the environment the way man first experienced the earth, as a spectacular and complex place.”

In contrast to his New York experience, Noguchi’s Atlanta commission came with a site, funding, and enthusiasm. In 1973, High Museum volunteer Frankie Coxe had suggested building a children’s playground that was also a work of art, and museum director Gudmund Vigtel decided that should be his institution’s bicentennial gift to Atlanta. They were given a site in the Olmsted Brothers-designed Piedmont Park, less than a mile from the museum, and applied to the National Endowment for the Arts’ Art in Public Places program for funding. Noguchi was always their first choice. His statement, “I think of playgrounds as a primer of shapes and functions; simple, mysterious, and evocative; thus educational,” was to be quoted on a ream of fundraising letters before he was officially hired in October 1975. A few days later, the sculptor visited the Atlanta site, and his design for Playscapes was completed by December.

Noguchi's site plan and elevations for Playscapes at Piedmont Park

The Atlanta playground’s one-acre, relatively open site is surrounded by trees, and includes a version of the stepped swing set and seesaw modeled in his 1940 maquette, along with piles of blue and green climbing blocks, a low circular mound, a triple slide and a tower around which a set of steps slithers, taking you up to another slide. This metal tower has something in common with a number of Noguchi’s sculptures, which play with the idea of up, down, and around. The monumental stone Slide Mantras installed after his death in 1988 (one in Miami, one in Sapporo) split the difference between art and play, adult and child. In its early days, Playscapes was accompanied by a significant amount of arts programming. The Arts Alliance at the High Museum organized training sessions for high school students to lead arts-themed summer camps for younger students, and the Junior League funded photography and crafts classes in the on-site picnic shelter. Today, the site is used by a summer camp run by the Piedmont Park Conservancy, and there is a weekend farmer’s market nearby.

The Road to Restoration

Playscapes’s first restoration (more a repainting than full conservation) came 20 years after its debut, in preparation for the Summer Olympics. “What we found was, by 2005, there were structural issues with the slide components which had a lot of rust and corrosion, there was graffiti, and there were a lot of problems with social behavior around the site,” says Robert Witherspoon, project supervisor (collections management) for the City of Atlanta Public Art Program, Mayor’s Office of Cultural Affairs. “One of the slides was closed down and had a hideous chain link fence around it because of drug activity that was happening in the concealed space of the tower. In 2008–2009, the city spent $350,000 restoring the playground to conservation standards: putting the equipment back into Noguchi’s layout, stripping the paint, patching and repairing corroded metal, repainting the original colors. In a few places, they altered the original design to improve safety in fall zones, in the spacing between bars, and to add curved, lockable doors to the top and bottom of the tower. “We grandfathered the rest of the design elements so that we didn’t have to radically change or mess with the integrity of the design,” says Witherspoon.

With the $21,000 grant from Herman Miller Cares, the entire Playscapes was repainted and one wall in the pavilion fixed.  Photography by Martha Clifford.

In 2014, with a $21,000 grant from Herman Miller Cares—Herman Miller’s employee-led philanthropic foundation—the entire playground was repainted again and one wall in the pavilion fixed. “The effect is, it looks pretty much brand new,” Witherspoon says. In addition, the parks department brought in three semi-trucks of mulch, creating a softer surface underneath the Noguchi equipment. Going forward, multiple city agencies have vowed to keep up with maintenance. Ideally, says Witherspoon, Playscapes would have its own endowment to keep it looking new. The latest restoration, he says, “is a game-changer. Noguchi wanted to create a site that brought high art to everyone. That was something innovative when the park was designed in the 1930s, but even when it was installed in 1976.”

Playscapes after a refurbishment from Herman Miller Cares. Photography by Martha Clifford.

In fact, it’s still innovative. Interest in the design, safety, and efficacy of parks and playgrounds are on the upswing, as they were in the decades in which Noguchi was perfecting his approach to play. “He had a really good concept that playgrounds should not be designed like military exercise equipment for a cheaply executed boot camp,” says Hart of the Noguchi Museum. “He thought kids should experience the environment the way man first experienced the earth, as a spectacular and complex place.” Even if we can only experience the full complexity of the Noguchi play experience in Japan, the restored Atlanta Playscapes are a start—and should start a larger discussion about landscapes of play for the future.

“Everything is sculpture. Any material, any idea without hindrance born into space, I consider sculpture.”

To learn more about Noguchi’s designs for children, visit Serious Play: Design in Mid-Century America at the Denver Art Museum, on view from May 5 to August 25, 2019.