How a small shop in Brooklyn is remixing modern design

“Today everything is ecomm, ecomm, ecomm,” laments Jared Blake, the 29-year-old co-owner of Lichen, a year-old Brooklyn vintage furniture shop. It might sound like an old-fashioned complaint for someone so young and clearly good at Instagram, but for Blake and his partner Ed Be, 31, selling furniture is as much about community as commerce.

“You know, Craigslist actually offers that kind of immediate interaction because you have to meet people to pick up what you buy,” Blake says. “No tracking number. Just a handshake.”

That’s precisely how Blake and Be met. Each had developed something of a side hustle collecting and selling vintage modern furniture. After trading emails over a Craigslist post, the pair met when Be bought a set of Herman Miller shell chairs from Blake. 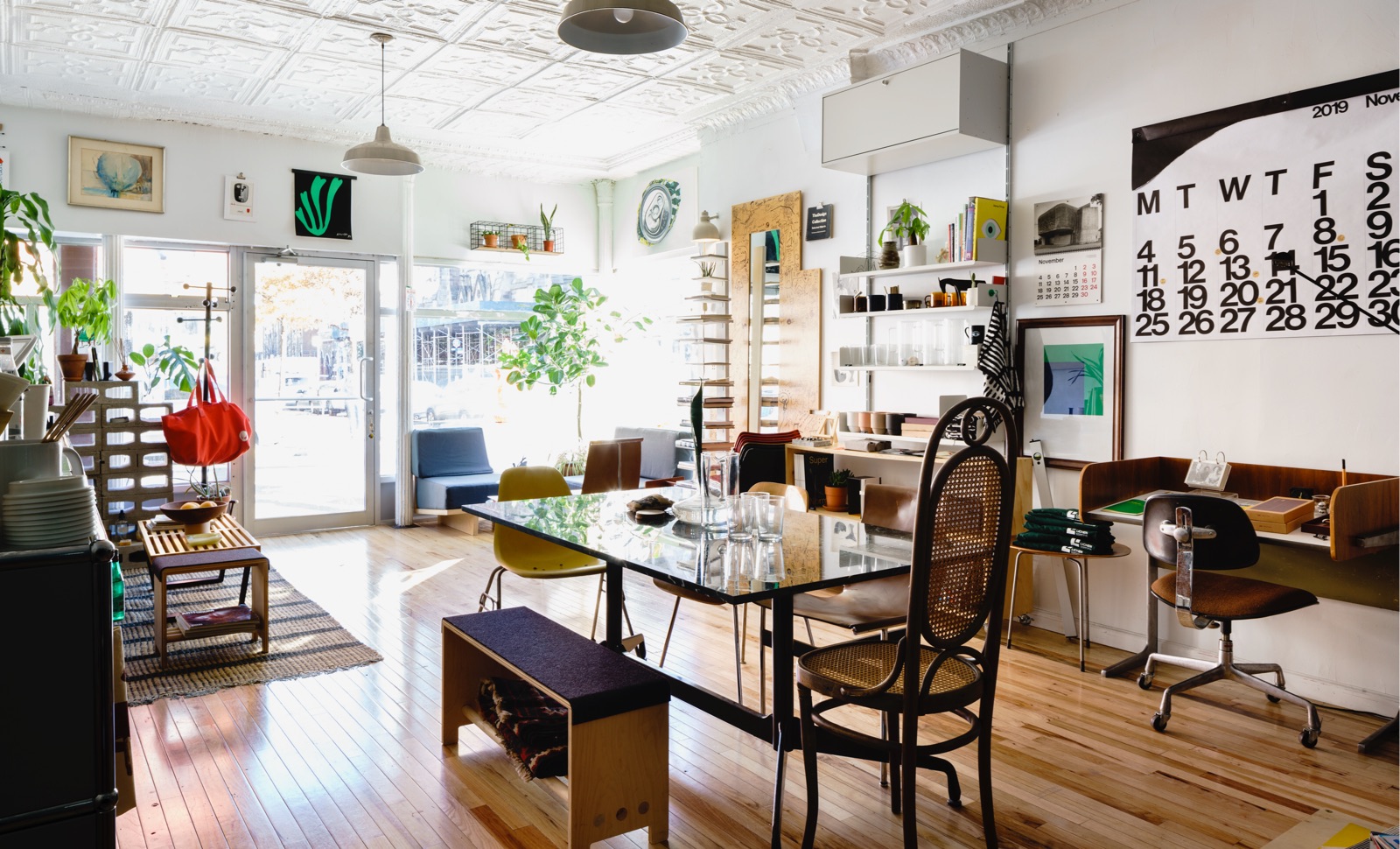 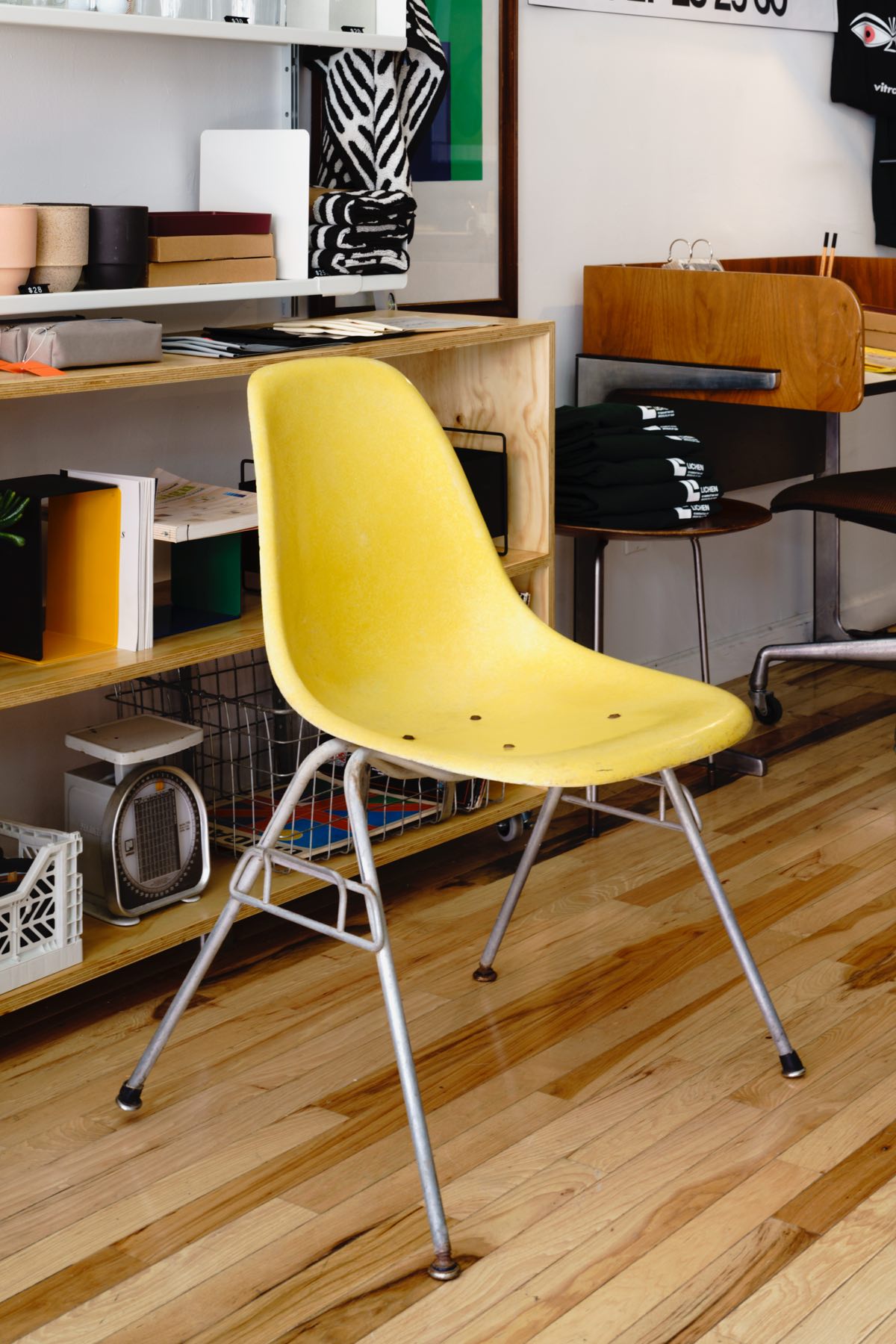 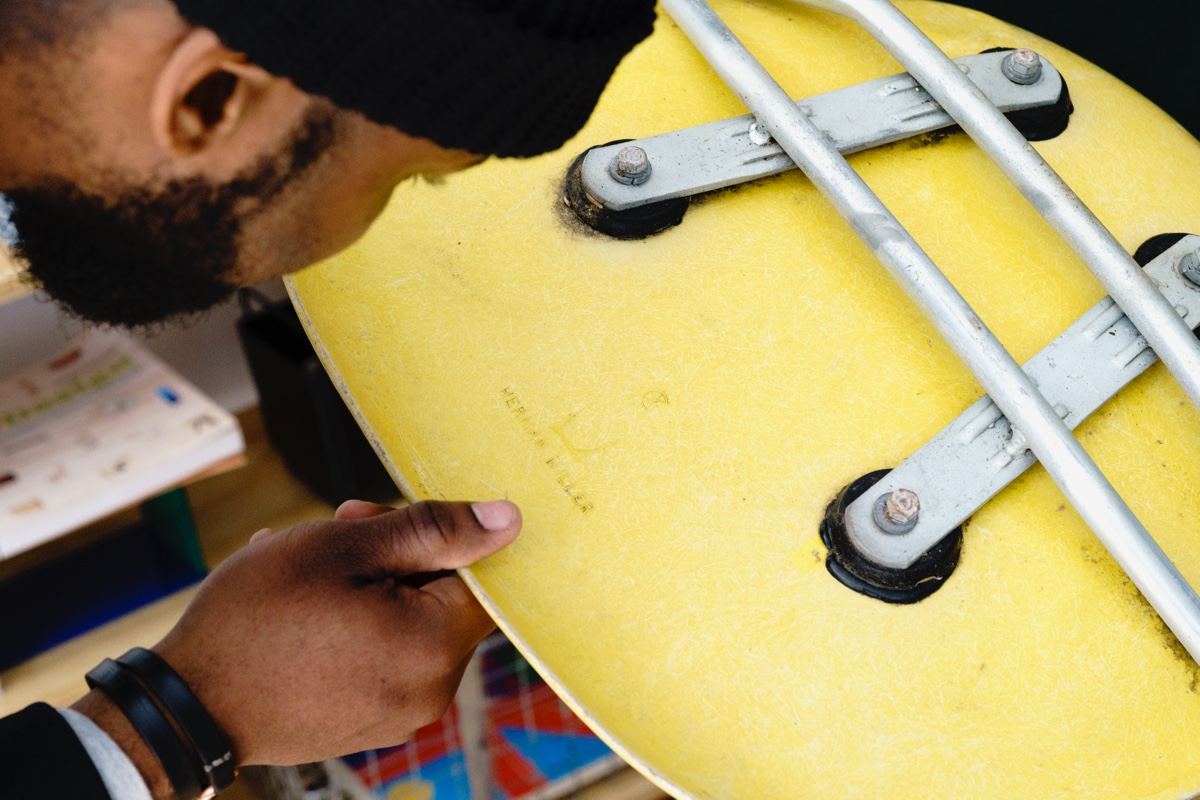 The pair met when Blake sold Be this vintage Eames Shell Chair on Craigslist.

“We offer a different approach. Typically walking into a furniture store in Brooklyn probably means I can’t afford anything. So, when people walk into Lichen and it’s me and Ed, it’s a bridge across cultures.”

“Jared was selling a set of Shells in greige and yellow,” Be recalls. “Usually that’s where Craigslist relationships come to an end. But we just kept talking. Had coffee. We sat down and I told him about my idea of a brick-and-mortar to sell all this furniture that I had been stockpiling.”

In October of 2018, the duo turned their passion projects into Lichen, a store on the corner of Manhattan and Montrose in Williamsburg, Brooklyn. When I visited the following September, the kind of IRL community Blake and Be craved kept coming through the doors of the 700-square-foot shop. 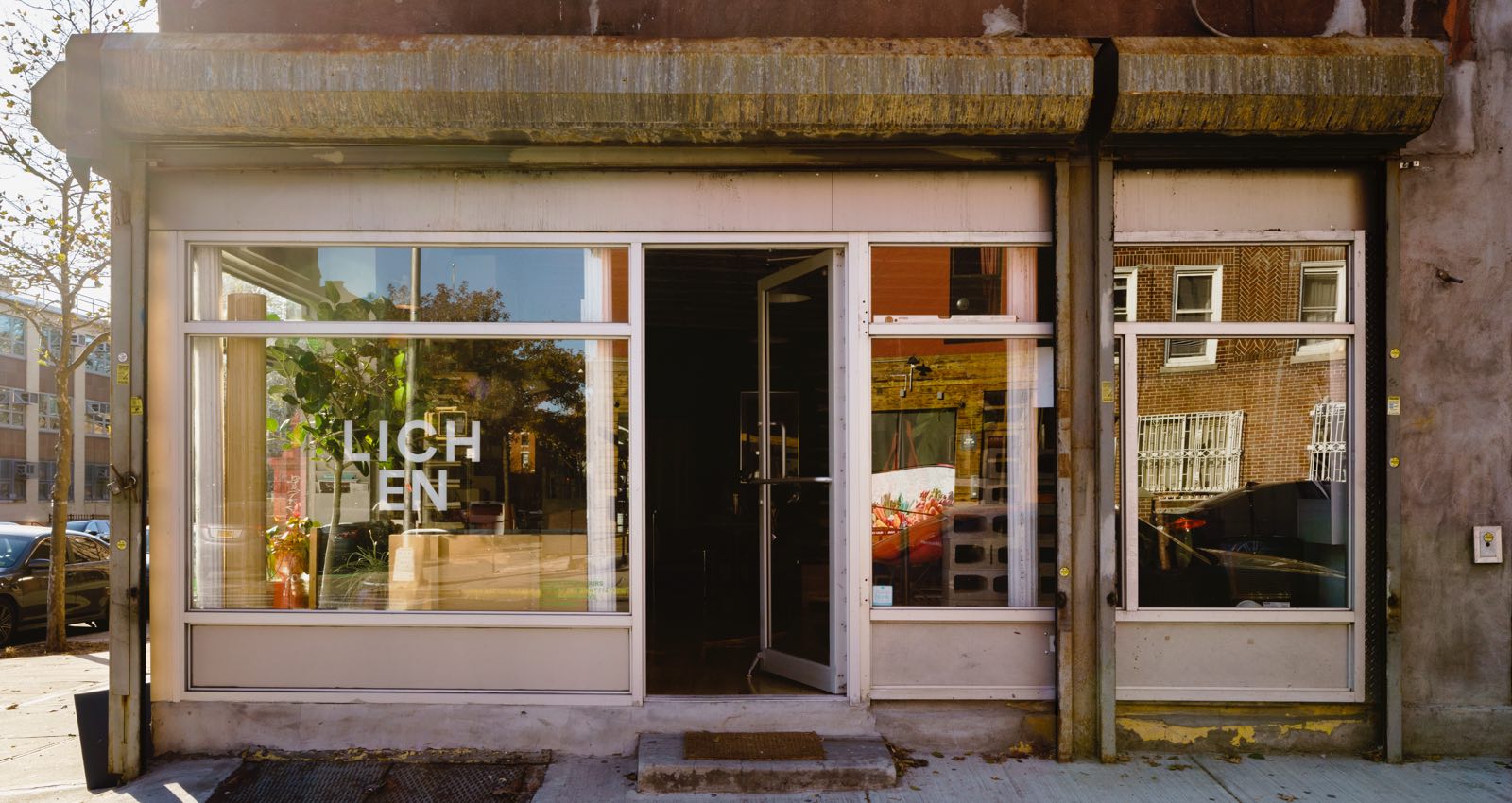 Their first visitor works at the neighboring deli and came armed with two cups of soup, a welcome gift on a rainy autumn day. The next was a woman who has lived in the neighborhood for 17 years and wanted to peruse the pair’s selection of vintage designs, which include a counter made from USM Haller storage, an assortment of housewares from HAY, an Alto vase from Iittala, a bench that Be himself reupholstered with material from a military duffel bag, and a Kiva table by Eric Chan for Herman Miller. 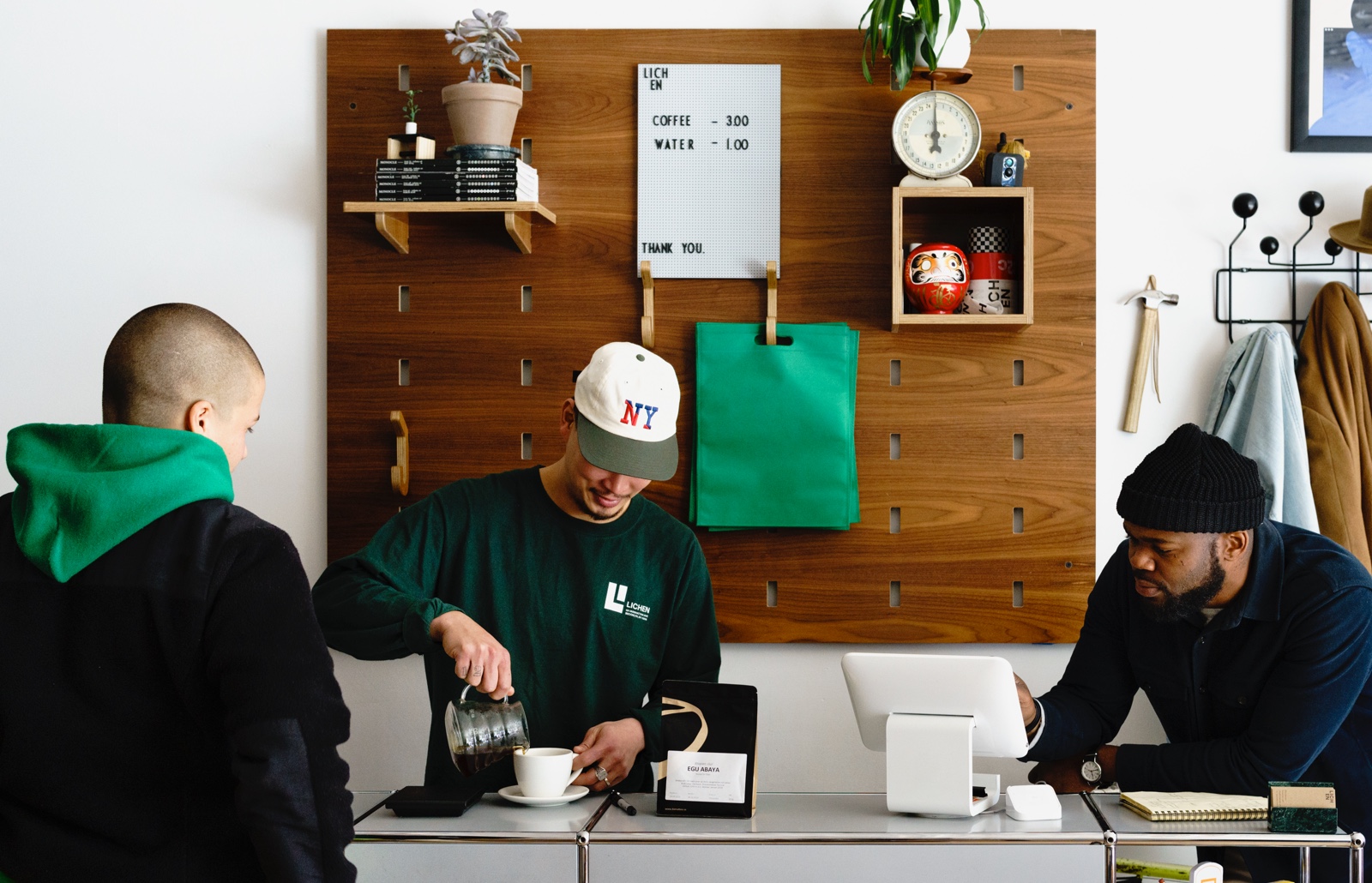 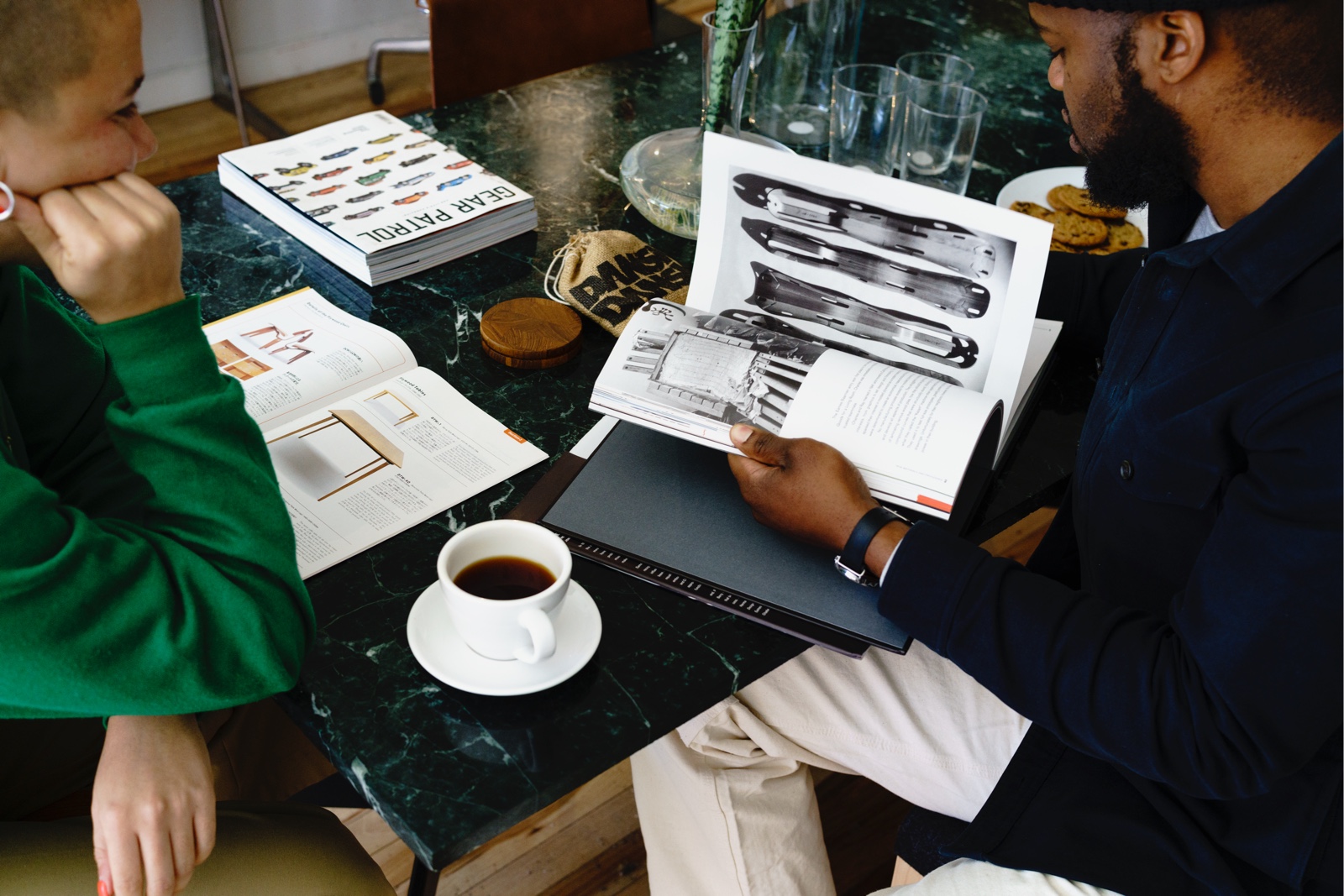 “Herman Miller is a good anchor … It’s what a lot of our customers already have, but also what they crave.” 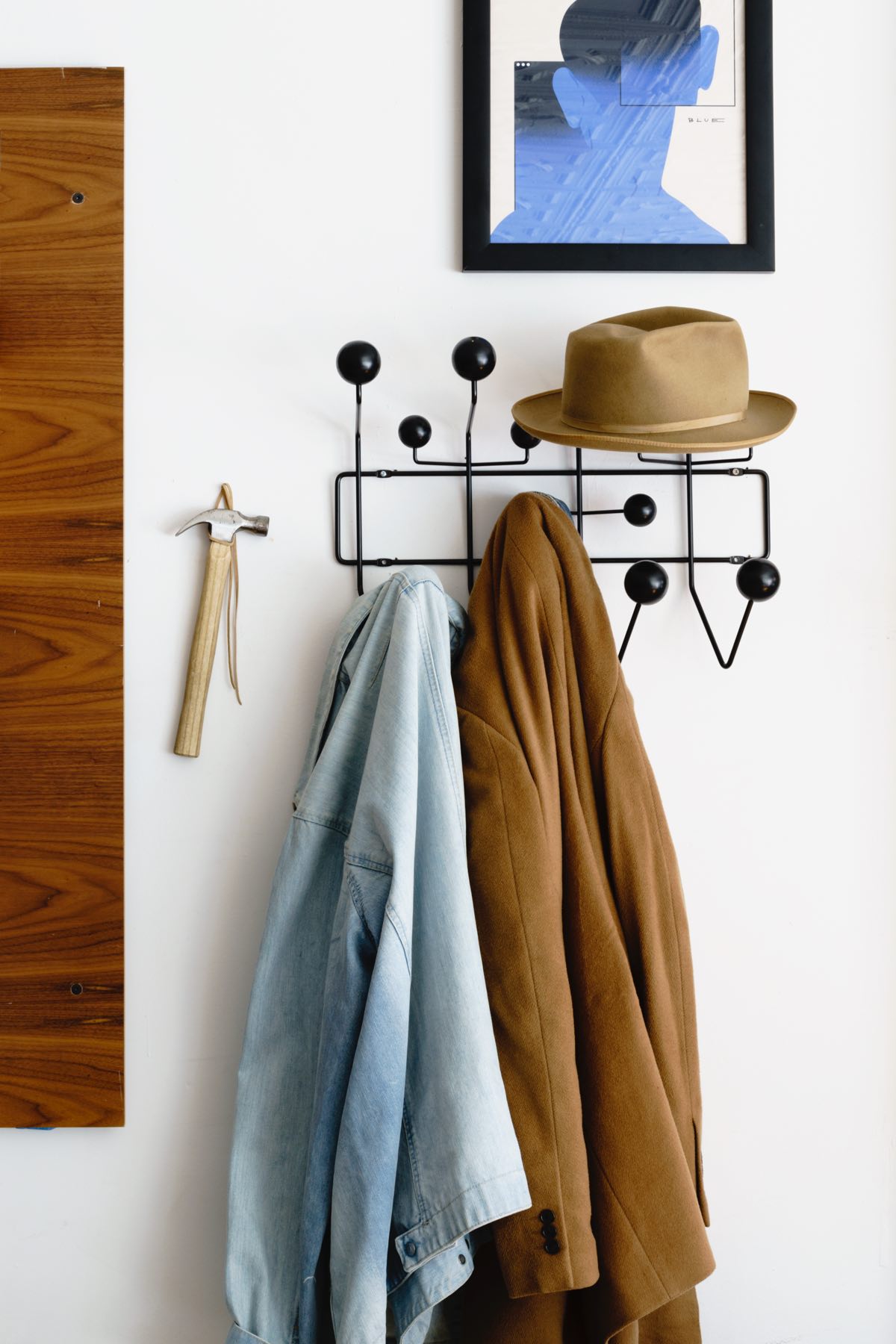 Lichen has become something of a community hub where locals and design fans congregate, have coffee, and hang out.

For Blake and Be, Herman Miller was an on-ramp into what’s now a full-blown fascination with design. Be fell for “the curves of the Eames DCM [Molded Plywood Dining Chair],” while one of Blake’s early acquisitions was an Eames Wire Chair with bikini pad. 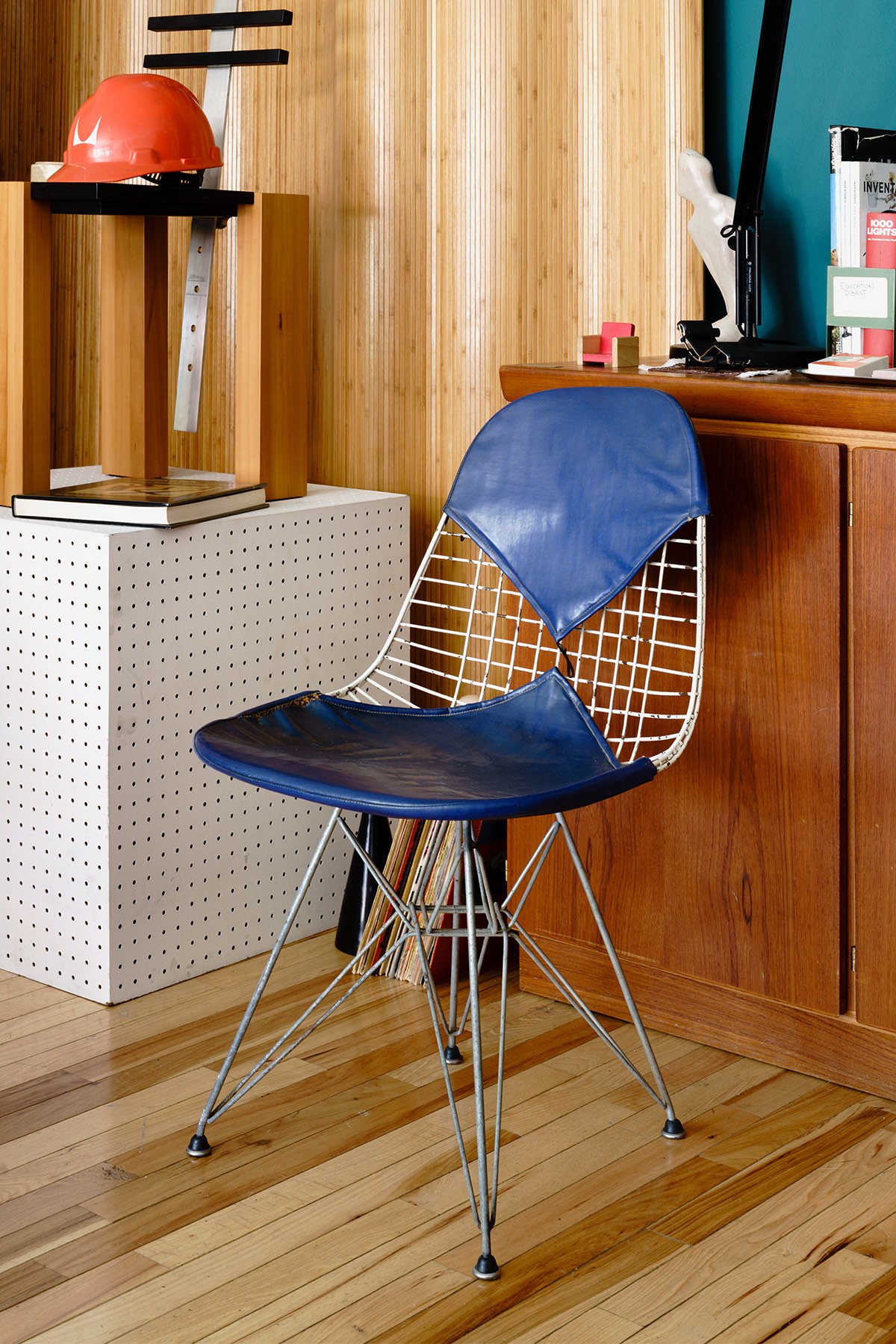 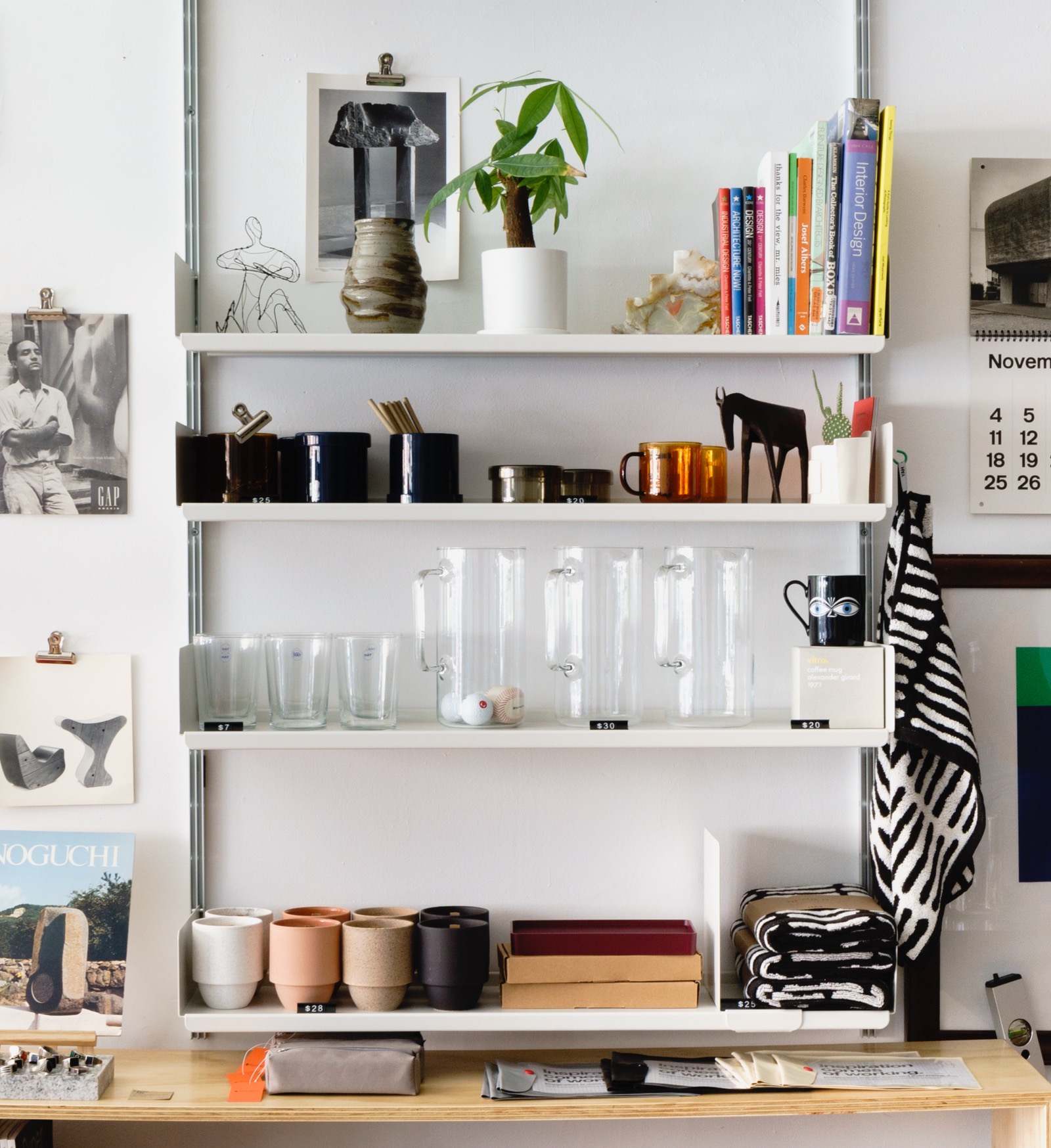 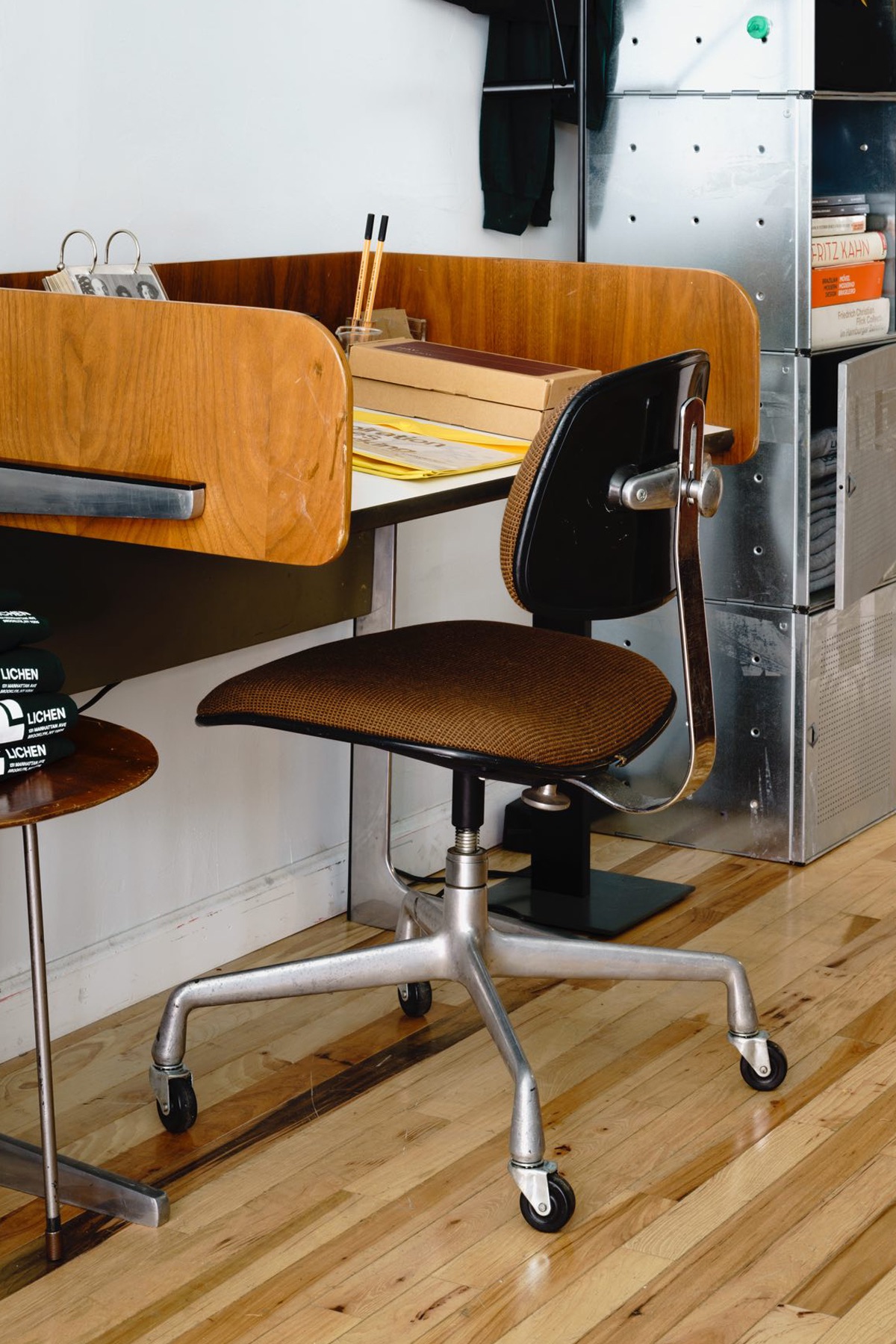 In addition to its stock of vintage furniture, Lichen is also a licensed HAY dealer. Blake has long been a fan of both the Eames Wire Chair with Bikini Pad (left) and the Two-Piece Eames Secretarial Chair (right) which Herman Miller produced from 1971 to 1981.

A lot of those customers live in the neighborhood, are often between 25 and 40, and work in creative professions. A good audience for the pair’s keen eyes for design perhaps, but not necessarily with the paychecks to chase vintage Charlotte Perriand or Joe Colombo pieces.

“We offer a different approach,” says Blake. “Regardless of color or culture, typically walking into a furniture store in Brooklyn probably means I can’t afford anything. So, when people walk into Lichen and it’s me and Ed, it’s a bridge across cultures.”

Blake chats with Syd, a friend and customer who frequents the shop.

Herman Miller has also offered Be, at least, a bridge across time. His history with Herman Miller runs far deeper than his beloved Eames DCM. His father actually sold Herman Miller office furniture. “Action Office was big for him,” Be said. “He outfitted the UN.”

That sense of finding new meanings and new markets animates Lichen in another way too. “It’s important for everyone involved to look at these objects differently than they have before,” says Blake. “I believe that great design really is for everyone. But people don’t see that enough. You don’t see it in ads. You don’t see people of color, but we like good design as well.”

Good design remixed for a generation eager to explore its creative legacy and the power of community.

No tracking number. Just a handshake.

Lichen is all about the human touch, growing community, and serving as a space to explore the world of design.