In 1968, designer Jack Kelley was faced with the conundrum of creating furniture for a groundbreaking new computer.

The most notable computer of 1968 was likely the brilliant and deranged HAL 9000, that paranoid intergalactic Siri devised by the visionary filmmaker Stanley Kubrick for his 2001: A Space Odyssey. Here on Earth, the distinction goes to Douglas Engelbart’s oN-Line System—or NLS—which he debuted in San Francisco in what is now recalled as “the Mother of All Demos.” Engelbart was the head of Stanford Research Institute’s Augmentation Research Center, and his NLS featured a then-revolutionary design that included a detached keyboard, monitor, and the first mouse. More importantly, it was one of the first examples of a computer designed for the user’s experience. Read more about the Demo on WHY.

To showcase the system at the Joint Computer Conference, Engelbart needed a setting for his computer and a partner who was thinking about furniture the way he thought about technology. He sought out Herman Miller for the project. Robert Propst, director of the Herman Miller Research Corporation, assigned Jack Kelley—a codesigner of the company’s Action Office System—to play lead designer. WHY sat down with Kelley in his West Michigan home to learn how he made computer history with a prototyped keyboard console, a souped-up Eames Shell Chair, and the first-ever mousepad. 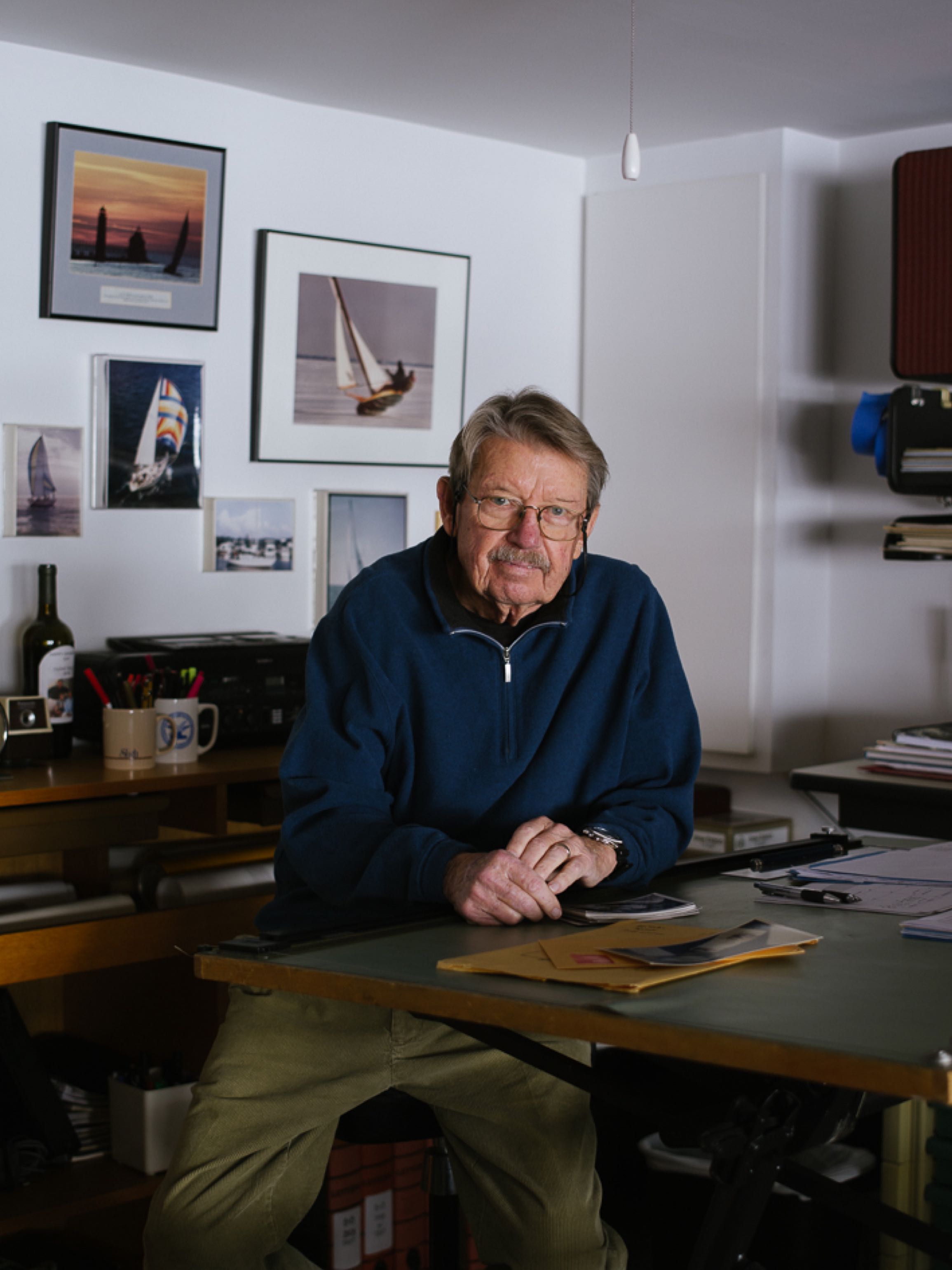 How did you begin your design work for Engelbart and the Stanford Research Institute (SRI)?

We had to start by looking at what the problem was, or at least to start to define it as best we could. That’s one thing about Robert Propst. He always had this maxim: “If you can identify the problem and articulate it enough to have a criteria developed, then solving the problem is easy.” And that’s what we did.

Propst sent me out to Menlo Park where SRI is located, and I interviewed Douglas Engelbart and people on staff to get a feel for what they wanted. I also got a look at this crazy thing called “a mouse.”

When we started, we just gathered information, and assessed what their needs were, and what it is they were trying to do with this computer. Prior to this, all computers had the keyboard as part of the housing on a desk—the keyboard was not separate. So that was the first thing I noticed: You can’t lug around a 40-pound CRT monitor and expect it to respond to you—you have to respond to it. I wanted to reverse that dynamic.

“Furniture companies are at the mercy of technology—because technology doesn’t give a damn about how you work.”

The idea of the computer workstation was just starting to gain traction at the time of the Mother of All Demos. In fact, Propst seems to have been thinking about how Action Office could be part of the solution.

Propst worked from the standpoint of identifying “work vectors”—the different positions that people would have while in the office. There was a vector for telephoning, one for stand-up working, and one for sit-down working, and also one for portable communications with portable tabletops.

At the time, computers were freaky looking things, and all their electronics needed whole rooms to fit everything. Our challenge [with this computer vector] was: “Can we break this computer away from having a keyboard and monitor unit all in one? Can I take the keyboard out of it?” And the SRI researchers said, “Yes, you can.” So we did. We came up with the console which includes the very first mousepad, because it had the very first mouse.

That’s one thing about furniture companies—they’re at the mercy of technology. Because technology doesn’t give a damn about how you work; technology is the process of making something respond—and give you information and so forth—but can be totally misused and doesn’t even care what you think. You have to adapt to it. And that hasn’t changed.

What furniture finally made it onstage at the Demo?

The stage had an Eames Shell Chair and attached to it was the console I designed, which swung out of the way so Engelbart could ingress and egress. You could pick up the console and move it anywhere you wanted to. That was unique. The SRI team used the Action Office panel system onstage, with the cameras and lights held by the panels so they could shoot down on what Engelbart was talking about as he presented it.

I made the console myself. I made a wooden mold and vacuum-formed the housing from that mold. In fact, the building on State Street in Ann Arbor, the former Herman Miller Research Corporation office—that’s where we built it. We had an IBM Selectric keyboard encased in it with the mousepad area at the side.

Because of the hard plastic of the desk they were using, it wasn’t very comfortable to work with. The other problem was that things would slide on it. So there was a product called Naugahyde, which I selected as the base pad for the area—it had a very friendly relationship to the mouse. That worked much better.

“You can’t lug around a 40-pound monitor and expect it to respond to you—you have to respond to it. I wanted to reverse that dynamic.”

How many of the console chairs were made? Was there ever talk of offering it as a part of Action Office to the public?

That was a prototypical event—and we had one chair. The engineers all had their way of working, and it would have been very costly to produce on a prototypical basis. But nobody would have bought it because technology hadn’t caught up with what Engelbart was doing. You have to look at it from this standpoint: The mouse was never used commercially until 16 years later, with the 1984 introduction of the Macintosh.

So the console chair was property of SRI, and if it’s beige and plastic and has wires, why should we keep it, right?

It becomes a big pile of technical junk.

It seems like such a turnkey moment, when the worlds of computing and the design systems to support it were finally adding up to something.

We had a great relationship. But remember, there was this 16-year space between the Demo and the commercial release of the mouse, and a lot of things changed in that period of time.

During an interview 15 years ago, a journalist asked me, “What is the future of the office going to be?” and “What kind of furniture do you expect?” And I said, “Don’t worry about the furniture—just make sure you’ve got a pocket on your shirt that’s big enough for the computer.”